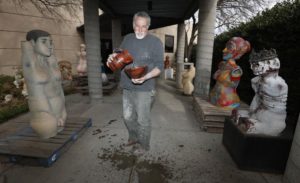 Christopher Stanley was born in Iowa City, Iowa in 1964.  He attended Rockhurst High School in Kansas City, Missouri where he graduated in 1982.  Attending The University of Kansas from 1982 to 1988, Mr. Stanley received a B.S.E. in Secondary English Education and a B.F. A. in Design.  In 1989 Mr. Stanley and his wife, Annie moved to Pullman, Washington, where, Mr. Stanley earned his M.F.A in 1991. Mr. Stanley has lived in Odessa since 1992.  He is currently an Associate Professor of Art, and teaches a large distribution of classes both in and out of the Art Department. Mr. Stanley has had work published in two books, which are, ‘500 Bowls’ and ‘Surface Design for Ceramics’. He has received awards not only for his art, but also for teaching and community service.